I was going to stop posting.  Take a year off...you know....do other things.  But then I said to myself "Self.....you'd better write down some of the things that are on your mind and make room in your head for more important matters".  So, here I am.

It’s probably just me. (Is it?  Is it just me)?  Today I wanted some information so naturally I turned to my friend Mr. Google. With not much time to spare I was very specific in my request:

Now you’d think the only things that would come up are …..Balzac …..and...... Zola.  But no.   There, listed before my favourite authors, were ads that had nothing to do with literature -

That’s not right is it?  Google also recommended I check out Stendhal but I have no interest in him.  Considering Google knows everything from my shoe size to my tax records, it's quite a major boo-boo not to already know this.   Now I ask you, what does Balzac have to do with coffee or Zola, weddings?  Nothing!  I'm sure they're very good products, but........

Once information is fed into my brain I can't just leave it at that.  To torture myself further, I just had to know what was going on with other famous French authors.  For some reason Proust and Flaubert seem to be safe. I’m guessing it’s pronunciation that’s keeping them off the shelves, but I could be wrong.  Proust’s Prunes…..no, I can see where that would be a problem. 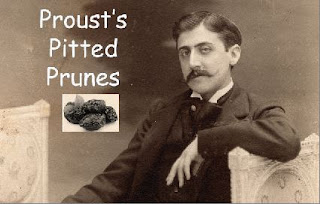 It's not only the French literary giants that have their names taken in vain.  If you think Shakespeare escaped modern day advertising, you'd be mistaken.  Did Shakespeare fish?  I wonder why they chose his name instead of, say, off the top of my head, some famous fishing type person?

Maybe I should just start going back to the library for info.  No, I'm too lazy.

There.  One less thing to think about.

Have a good one!