I’m not writing about my favourite city these days as apparently I’m "somewhat obsessed by it".  So, I’m giving it a rest for a week or two.  On that note, I’m randomly picking a few things which I think are worth sharing.  You never know when you may need this sort of information for cocktail party conversation.

Paris Green, also called Emerald Green, was a popular paint pigment used by such artists as Turner, Monet, Renoir, Gauguin, Cézanne and Van Gogh.  Emerald Green is an OK name, but I prefer Paris Green.  Apparently it can also be used to kill bugs which is probably why there are no roaches in the Musée d’Orsay. 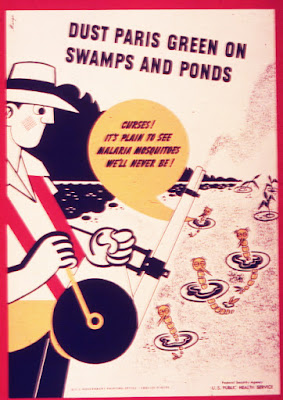 As a little extra bit of info, in case the party is getting dull, you might mention that Paris Green was once used to kill rats in Parisian sewers, hence the name. Personally I'm against that sort of thing, but that's just me.

At the turn of the century, the last century that is, it was also used as an insecticide for produce (blended with lead arsenate) and pretty much burned everything it touched, and Paris Green was heavily sprayed from airplanes in various places to control malaria.  I wonder who even thought of trying these things?  Maybe an artist who had bugs in his atelier and a touch of jaundice.

If you ask me, this is pretty good stuff.  You can paint with it, kill bugs and avoid disease.  It’s an all purpose product and every home should have a can or two.

I’m also fond of Plaster of Paris.  You never know when you’ll get the urge to sculpt something or mold yourself a cast if necessary.  But that’s another topic for another day.