Thinking of Catherine....Deneuve That Is 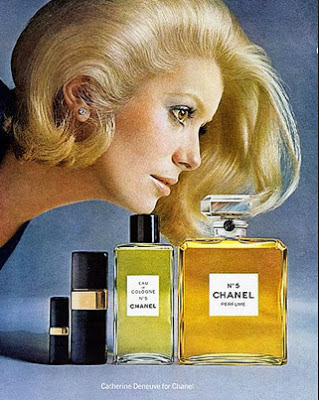 When I was a teenager, I didn't realize Catherine Deneuve was an actress.  To me she was the fabulous model for Chanel No. 5.  Catherine's face was plastered in every magazine and her nose was never more than a few inches away from a Chanel bottle.  Who wouldn't want to sniff No. 5 all day?  And.....get paid for it!

Sometimes she had a feckin' big bottle of Chanel.  They kept it away from her face though - she'd look silly. 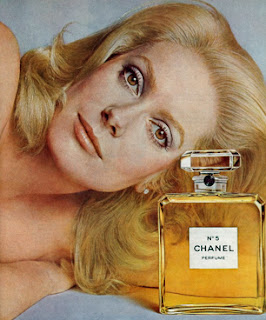 I admired her hair color. Champagne blonde and never greasy. Apparently she did it that color because she thought it looked great on Marilyn Monroe. (My middle name is Marilyn but that's where the similarity ends. I couldn't even spell "Marilyn" until 5th grade). I remember buying some L'Oreal to get that fantastic hair color but it ended up being ORANGE. Apparently I read the instructions wrong.  But that's happened to almost everyone hasn't it...... 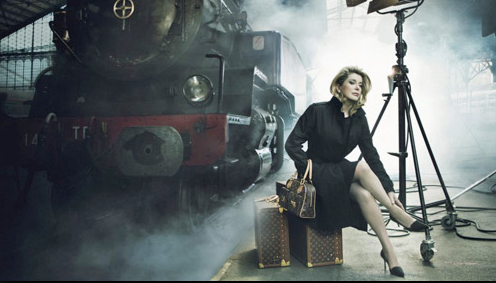 Deneuve sat on Louis Vuitton luggage a lot. I like that. I can't afford LV luggage and when I sit on other people's I've noticed they get really ticked. 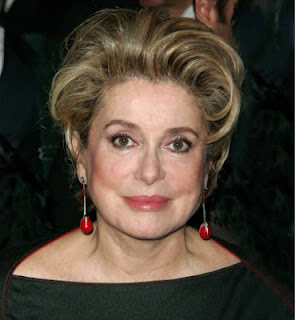 Catherine is now 70 years old and is still stunning.  She's the epitome of elegance.

She doesn't take any guff either - from Wikipedia:

Deneuve is a longtime cigarette smoker and has expressed her frustration with the increasing bans on smoking. During a press conference held in  Madrid , she was told to put out her cigarette and refused by saying she would pay the fine instead. "I think it is all very excessive",  Deneuve told reporters.