No beating around the bush.....

I went to see "American Hustle" and thought it was a pretty crappy con.  Maybe I missed something.  Would people pay money to help them get loans, get zero in return, and just let it go?   No one sitting at their door (they weren't hard to find......they had an office for God's sake).  No retaliation whatsoever?  Not one single person giving them a hard time?  And, I didn't care about the characters....if they got caught....fine.....if they got away.....fine.  Whatever. 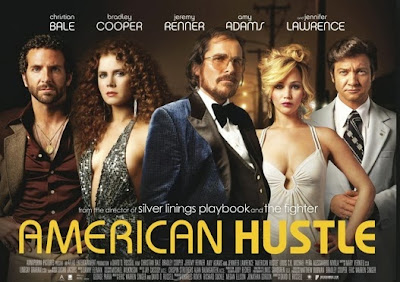 You guessed didn't you?  Somehow I just didn't get this film. I felt conned out of the ticket price.  (You don't have to write - I know I'm in the minority.  I didn't even know it was a comedy until it was announced for the Golden Globe Awards).

But, I love a good con....so to restore my faith I returned to "The Sting".  Best Picture of the Year in 1974 (is that possible?) starring Paul Newman and Robert Redford.

Now this movie has a great con.  In fact, there are several cons going on.  Newman and Redford don't have it easy either!  People are shooting at them, people are pissed - just as it should be!  And of course we all wanted them to succeed.  They're NEWMAN and REDFORD!  Of course we're on their side!

Next I'll watch "The Usual Suspects".  There's a major con going on (although it's not a "con" film).  I won't even mention the characters because it's just such a clever plot and I don't want to spoil it.   If you haven't seen the film, you should!  It's a tougher movie from the others, but a great one.


In two days they'll be announcing the nominations for the Academy Awards and I know everyone will be gushing over American Hustle.....except me.

Fine.  I'll just sit there and criticize the gowns and hairdos.  It's the only reason I watch anyway!  Let's see who can top Cher this year!