I'm Dreaming of a White Christmas

Remember how in "White Christmas" Bing, Danny, Rosemary and the other one were so looking forward to snow in Vermont?  Huh?  Remember that?

They sang their little hearts out in anticipation.  Read their lips.....SNOW!

We're all thrilled - except for those cleaning the streets, and those having their cars towed away for the aforementioned street cleaning.


We get a front row view from our balcony.  It's not that I like to watch other people's misery, but, well, it's part of winter isn't it? 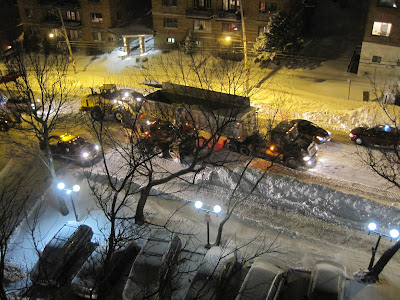 It was like a night at the movies watching snow removal. Traffic backed up, people getting out of their cars to argue with the truck drivers (guess who won), and just a real old fashioned mess. What fun!

Irving Berlin never mentions this in any of his songs.   "I'm Dreaming of Finding My Car" just doesn't cut it.