Rules for Kids and Adults

What I want to know is, why don’t parents drum it into their children that this rule applies until you’re dead!? No one wants a stranger blabbing away about whatever it is strangers blab about. (I'm not referring to little pleasantries like "it's a nice day".  I'm not a fanatic).

As an example, I was out enjoying the sun and a nice stroll, minding my own business, singing Piaf songs in my head, when someone approached me saying -

“Madame. Let me tell you ……something or other”. Might have been his opinion on the state of the world or maybe he didn’t like my face. Who knows? I could tell from his demeanor that I really didn’t want to talk with him. I was out enjoying myself, but he looked like he had a bossy point to make.

Now the first reply that came to mind was:

But that would be rude. And when we were kids, we were taught never be rude.

So I didn’t answer. I just gave him my best evil eye and he moved on. 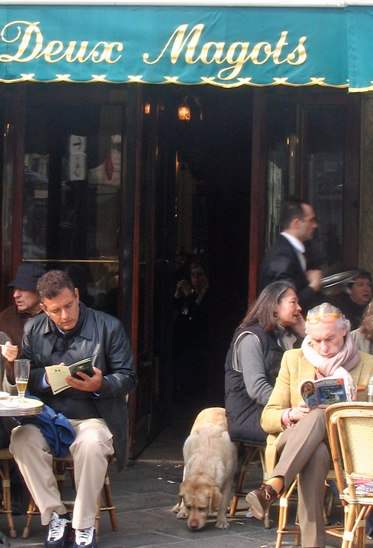 These people are not strange strangers so I'd probably talk to them.
If the dog approached me, I'd even practice my French.

“Strangers” are very big in the Quote World. Everyone seems to recommend them.

I have always depended on the kindness of strangers - Tennessee Williams

If a man be gracious and courteous to strangers, it shows he is a citizen of the world - Francis Bacon

Anyway, I trust Dame Edna on this one -

My mother used to say that there are no strangers, only friends you haven't met yet. She's now in a maximum security twilight home in Australia - Dame Edna Everage