Franz Reichelt was a French tailor who, in 1912, demonstrated his parachute by jumping off the Eiffel Tower.  It didn’t work. I know it’s easy to say this 100 years after the fact, but you’d think he would have done just a little more research before attempting this sort of thing.  Apparently his friends tried to talk him out of it, but he was determined.  Right…well… 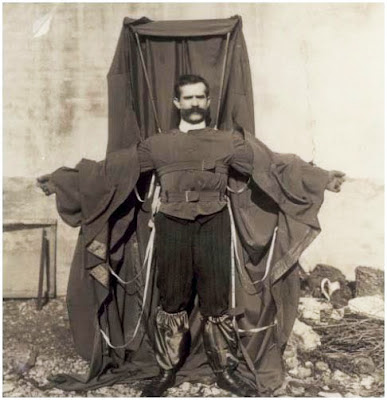 It’s great to have a dream and wonderful to try and make it a reality.  But still, there are some things that you can’t go back on and jumping off the Eiffel is one of them.

This is a particularly weird item because there is news footage of this poor fellow jumping.  It was, after all, a big story at the time and the cameras were rolling to celebrate his success (at least I hope that’s why they were there).  If you're interested, it can be found here.

Some people commented that he was very brave and did his best.  Others say he was just a dumb ass to do a thing like that.  I agree with both.

I wanted to find a great quote to go with this post, but I couldn't.  Too many quotes I looked at are of the "if at first you don't succeed" train of thought and these wouldn't do Franz any good.  If you know of a quote that would apply here, let me know.  I'd hate to think there's no good lesson to learn from jumping off the Eiffel without a net (besides the obvious "don't jump off the Eiffel without a net")!

Update:  I received some great quotes -

From Cheryl at The Art of Being Conflicted,  (Visit her blog - she makes me laugh)!
Too bad Dr. Seuss wasn't around in Franz's time....
THANKS!