With apologies to anyone who is actually looking for information on Cold Fusion.
There isn’t any here. Sorry.


Now for some strange reason, I keep hearing people refer to “Cold Fusion” in regular conversation these days.

You can skim over this bit –


Cold fusion is a proposed type of nuclear reaction that would occur at relatively low temperatures compared with hot fusion. As a new type of nuclear reaction, it was proposed to explain reports by experimenters of anomalously high energy generation under certain specific laboratory conditions. It has been rejected by the mainstream scientific community because the original experimental results could not be replicated consistently and reliably, and because there is no generally accepted theoretical model of cold fusion. Wikipedia*

This isn’t normally something I’d think about. I don’t know any electrochemists, and the only physicist I know is Sheldon on “The Big Bang Theory” but even he wouldn’t keep repeating Cold Fusion, Cold Fusion, Cold Fusion (although I know he’s mentioned it). He’s into “String Theory”. The movie “Cold Fusion” is a couple of years old and who’d be talking about it now? It only got 1-1/2 stars.

No, I’ve been hearing it in everyday conversation –

“Oh, I can’t understand this photocopier any more than I understand Cold Fusion”

Anyway, because I’ve been hearing it so often I decided to look it up (Ref: smart bit above*) but while Googling I also found out it’s a type of ice cream. That’s probably what I’m thinking of. Cold Fusion Gelato.

In any case, I’m tired of hearing it. If “Cold Fusion” are new buzz words, then someone should fill me in. Maybe it’s replacing “Awesome” which is getting pretty tired -

“Hey dude – let’s take the afternoon off and go to the movies”. “COLD FUSION”! 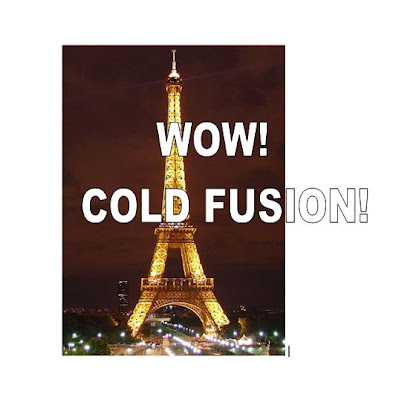