The Best There Is At Any Age – Charles Aznavour in Montreal

Lately I’ve been missing France more than usual. I needed a fix, an injection of that French feeling that only comes from sitting in a Parisian café, preferably in the Latin Quarter or the Marais. But wait! That’s not exactly true! Last night we had a breath of French air right here at home. 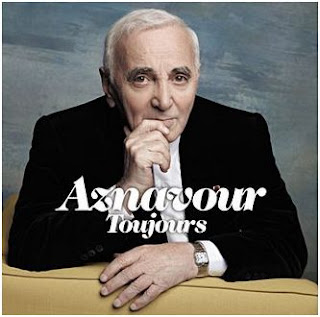 Charles Aznavour is back in Montréal performing at the new Maison Symphonique of Place des Arts and I was front row center (well, 11th row center actually) for his first concert of this tour . For those of you who are wondering, believe me, he’s in top form. Not “top form for a person his age”. Top form for any age. His voice is strong (and grew stronger the longer he sang), his movements precise. Yes, of course he’s aged (he’ll be 88 next month), so he told the audience if needed, he’d sit to sing. But he didn’t sit for more than a few minutes of a two hour (no intermission) performance. He walked, he danced, he sang, talked and joked and had the audience in the palm of his hand.

The evening began, like most Aznavour concerts, with his latest songs from the most recent CD, then moving on to his songs of avant hier…and earlier…. He sang pieces that I hadn’t heard him perform in quite a long time – Paris au mois d'août for example. Particularly beautiful was “Sa jeunesse”. Aznavour recited the lyrics, then the melody was played on the piano, followed by Aznavour putting the words and music together in song. Very moving.

I’m not a reviewer, I’m a fan. I’ve been going to his concerts for I don’t know how long. As soon as the announcement of a concert tour that includes Montreal or Paris comes out, I hear from my all my spies who know I’ll be thrilled to hear I have the chance to hear Aznavour perform one more time. He never disappoints. Each and every concert has been a gem and if you can get a ticket, I recommend you hear him for yourself!

I’m looking forward to another visit in a year or so. 88 years old is nothing. 90 is the new 60 isn’t it? In any event, this seems to be the case for Charles Aznavour.