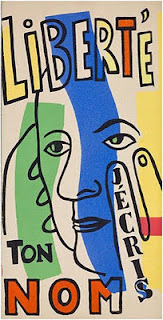 “Above all, it is a matter of loving art, not understanding it”.
Fernand Léger

When not raving about Paris, I’m raving about the Côte d’Azur. The French Riviera is a beautiful area full of art, history, markets, parks the Mediterranean and warm sun.  I can't think of a better place to relax and soak up some culture at the same time.

Several years ago, while exploring the area around Nice, we came upon Biot, a charming town known for its artisans especially in glass-blowing and pottery. It’s a community that celebrates the arts and it’s here that you’ll find the Fernand Léger Museum.

The Painter
Fernand Léger (1881-1955) is, in my opinion, in a class by himself.  His early work was an offshoot of cubism, and he ended up doing almost sculptural paintings - abstract yet not.

I wasn’t all that familiar with the work of Léger when we first visited Biot, but I saw a piece which influenced the way I look at art. Léger coupled his painting with the poem “Liberté” by Paul Eluard and I immediately fell in love with the piece.  It's not that we don't see words and images combined every day, but this was special.  This was never meant to be advertising.  This was art meeting art to form art.

The Poet
Paul Eluard (1895-1952) was one of the founders of the Surrealist movement which I'm not too keen on but there is nothing surreal about this poem, except for the length.  (A little literary gossip - Eluard was married to Gala who divorced him to became Salvador Dali's wife).

The Poem
The long poem Liberté, j'écris ton nom was originally titled simply Liberté. It was the first poem in the collection Poésie et vérité (1942). Éluard wrote it in the summer of 1941 and called it a poem for a special occasion ('poème de circonstance') because it gave expression to the contemporary feeling of hope in the battle for freedom. The poem became exceptionally popular. The word 'Liberté' and the recurring line of verse 'j'écris ton nom' generated so much excitement and enthusiasm that the R.A.F. – the British Royal Air Force – distributed thousands of copies across all of France.


From the National Library of the Netherlands
Below is the English translation of the poem for anyone interested.  The original French poem (which is of course preferred) can be found at alalettre.com