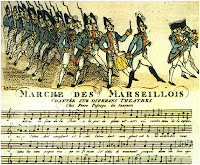 Last weekend my sister and I took the metro to the Salon des Métiers d'art du Québec, the annual Christmas show of fine arts and crafts. The day began well. While walking through the metro station, an "unusual" fellow was belting out a rousing rendition of the Marseillaise. We wanted to stand at attention and salute but we quickly realized he didn't actually know the words. he can be forgiven because this isn't required learning in Canada.

For the record, here are the words to the first verse which I am going to tattoo on my arm:

The rest of the day was fun. The Salon has beautiful pieces. Original works of art - glass, jewelry, sculpture, leather bags and so much more. My husband, Joe, is helping out at a booth 1109 for the Musée des maîtres et artisans du Québec. He’ll be there until 5:00 pm today, December 7, and again on Wednesday December 14 from 5:00 PM to 9:00 PM. Say 'hello' and tell him you read this blog. He'll give you a FREE, well actually nothing because it's not his stuff on display now. But, the booth has beautiful handmade glass pieces that would make fabulous Christmas presents and you'd be supporting a gorgeous little museum. 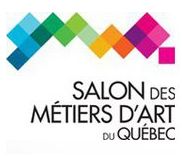