﻿The rue des Grands-Augustins is a beautiful street steeped in history. Situated in the 6th arrondissement, the buildings are primarily 18th century and boast famous inhabitants such as Picasso, and Robert and Sonia Delaunay. Thankfully, the French are excellent at marking historic locations which takes the guess work out of seeing ‘what’ happened ‘where’. 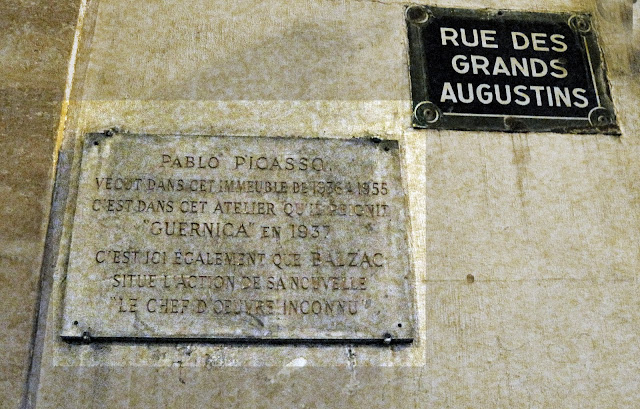 In 1931, Picasso illustrated Balzac’s Le Chef-d’œuvre inconnu for art dealer and publisher, Ambroise Vollard. I understand he was so taken with the story  which was set on the rue des Grands-Augustins that he decided to move there. This seems as good a reason as any if you ask me. It must have been an inspiring location as it was here Picasso produced Guernica. Not that Picasso had painters block or anything – he could have produced masterpieces in a sewer, I’m sure. Still. Balzac and all……


Art is the elimination of the unnecessary.
Pablo Picasso