Oh No! Not Nostalgia!

I can’t help it. Something about this heat wave is taking me back to when I was a kid and how fun summer was (at least that’s how I remember it now).  Swimming, roller skating, biking, skipping, hop scotch……we were always out doing something and “staying out of trouble”. We didn’t have knee pads or helmets, but we managed to survive limbs and brain intact (unless you can prove otherwise)! We heard the occasional “don’t poke your eye out” and “stay on the sidewalk” but those were pretty much all the safety measures that were in place.

Summer also meant special events. They may not sound all that hot now, but we thought these places were amazing:

Belmont Park opened in 1923 and closed the gates in 1983 but it was a major once-a- year summer treat. Let’s see, there was a roller coaster (that my mother wouldn’t let us go on – probably wise – it was pretty rickety and, I think, made of wood), a haunted house (not very scary), a laughing fat lady, a merry-go-round, a ferris wheel, and various other small time rides that kids wouldn’t look at twice today. We thought it was FABULOUS. Cotton candy, candy apples, rides….and all by the river (which we had to stay away from in case we fell in).

For real adventure and high-tech entertainment, we went “over the border” to the Plattsburgh Drive-In. Don’t get excited though – it too has been demolished. According to the information I could find, it opened in 1948 and had the last showing in 1973. Imagine going to another country to see a movie! And not only that, we could stay in the car! I don’t actually ever remember seeing a film, but I do remember the giant screen and falling asleep. (Probably an adult plan to get us kids to shut up for a while). 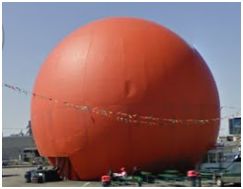 This giant orange ball on Decarie Blvd. is still going strong.  Gibeau Orange Julep has quenched the thirst of Montrealers since the 1920’s. I have no reason to doubt this fact it but I wasn’t around then to confirm. What I can tell you is that it's been there for a long long time serving hot dogs, hamburgers and the secret recipe delicious Orange Julep drink. The Orange Julep is an unofficial meeting place for classic car lovers on Thursday nights so this landmark continues to prove popular with kids of all ages!


You probably think I’m going to rattle on about how “times were better then – simpler” but I’m not. To tell the truth, I’d probably have preferred a real amusement park with water rides and to see a movie in an air conditioned theatre in 3D, and had something more substantial than a hot dog and Orange Julep…well no….that’s going a bit too far. But you know what I mean.

"It's never safe to be nostalgic about something until you're absolutely certain there's no chance of its coming back". ~Bill Vaughn

Hope you're enjoying your summer!