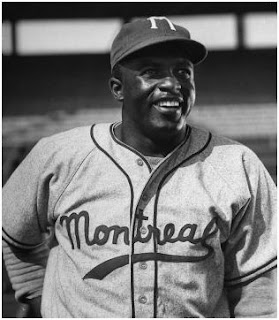 This week, officials placed a plaque by the door of the Montréal apartment where Jackie Robinson lived with his wife in 1946. Robinson played with the minor-league Montreal Royals before becoming the first black player to move to the major leagues the following year. The importance of Montréal to his story is the kindness and acceptance he received from his neighbors here at a time when the family had been facing racism.

This is so interesting and I had no idea they lived here.

Which brings me to my point (which isn't about baseball or segregation).

Montreal was incorporated as a city in 1832. There have been artists, actors, writers and politicians. Plagues, floods, the World’s Fair and Olympics. Great works created, great men and women doing great deeds. But where? Yes there are the odd markers here and there, mostly on private buildings with the date and history of the architecture. That’s good….but……

Maybe this is a Canadian thing.  We don't make a fuss over celebrity or achievements.  Or, maybe it's just too cold to bother putting up plaques all over the place, but it sure would make a walk more interesting and give us the chance to learn more about the city and it's history.

The Jackie Robinson plaque is a great idea and now I think this should be continued.  Think I'll make a list and present it to the Québec government.  Maye they'll hire me to "plaque" Montréal.  Shhhh.....don't pass this on.