This Is Such A Crappy Year

Long time no blog.  Long time no feel like it.  A very dear friend of ours passed away from a sudden heart attack ten days ago and we've been too sad to function.  It's a terrible thing to lose a friend, and we've lost two in six months. 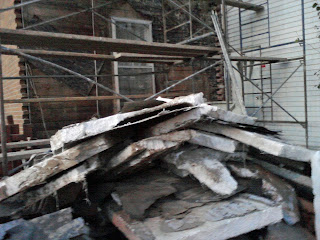 Seems we've had nothing but bad news this crappy year

And just to show you how daily crap happens -  I was at stable last week as a friend of ours had to take care of his horses while we were discussing serious things during the evening.  This was a nice little break from sadness.....the horses are beautiful with big, expressive eyes and one of them really took to me.  I was so happy to stroke his head and speak softly to him until he all of a sudden got spooked and tried to bite me. No one loves animals more than I do but that's the last time I put my hand out to anything over 1000 lbs.  I got away with just a bruise but it'll be a while (read never) before I trust a horse up close again.

So, this is my warm up blog to get me back in the swing of things.  Tomorrow is a new day.  I'll start concentrating on Christmas, Santa, Bing Crosby, turkey, and happy thoughts.

We miss you both.