﻿
﻿I didn’t think I would enjoy a play in Paris because my French isn’t top notch and two hours of translating in my head can be exhausting. I was wrong! The play’s the thing! Of course choosing something a bit familiar really helps!


Being totally familiar with Aznavour's work, one of the plays we enjoyed was “Je M’voyais Deja” performed at the Theatre Gymnase Marie Bell (built in 1820). I had to see this show because the whole thing is based on Aznavour's songs.  Katia Aznavour was the Artistic Director.


Another play we particularly enjoyed was based on the life of Edith Piaf, “La Vie en Rose et Noir” with Nathalie Lhermitte portraying Edith Piaf. Jacques Pessis narrated and played the accordion. Both were fabulous. Lhermitte, who has an incredible voice, portrayed Piaf just as I picture her in my own mind. This play still goes on in Paris when not on tour.

If your French is a bit rusty don’t avoid French theater.  Look up a musical (and there is always one playing), and enjoy the experience of these beautiful old buildings and a live performance. 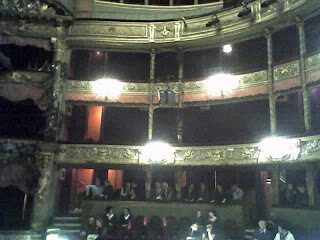