Mother Reveals She Stole Me From Rothschild 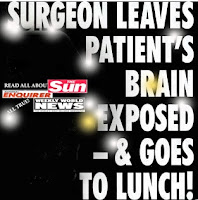 I miss the days of standing in line at the grocery store and reading the headlines from the National Enquirer. We don’t get it here anymore…..or maybe they’ve just stopped carrying it at the cash because too many people were thumbing through the papers to kill time.
The Enquirer, The Sun, Star Magazine, Weekly World News....they all have headlines that are real grabbers:

Who wouldn't want to know about these things?  I’m telling you, these reporters have to work really really hard to get this kind of news! Watergate was nothing compared to a man’s head exploding in a barber's chair, especially if they had photos! And how much digging did it take to find out that Hitler had secret UFO plans? I mean, this must have been classified as pretty top secret stuff.

I never wanted to be a reporter but I’m beginning to think the freelance route might be very interesting. If I could just meet one alien to interview to get my foot in the door.......mind you I cried at the end of E.T.

Here’s to the professionals who follow these stories and have the determination to bring this information to the general public. We thank you!  If it wasn't for these newspapers, we'd have to rely on the internet for the truth.