﻿
﻿Recently I started browsing World-Newspapers.com, a useful site which lists all the English newspapers worldwide. It’s surprising the number of papers that are published in English in Africa, Asia, the Middle East, and Europe. Naturally the first thing I checked out was papers in France. (As if I hadn’t already done this a thousand times). Still, it’s good to see in case new ones have appeared. A few samples:

Then, I thought STOP IT! Try a paper from a place that’s totally foreign (I don’t want to get in a rut).  The first paper I chose was from Bhutan.  I guess I was going through the list more or less alphabetically.

Here's a recent sample from the Bhutan Observer:

The biggest thromde tsogde, Thim Throm, does not have the minimum required number of aspiring candidates to contest in the upcoming thromde election for the post of thromde tshogde tshogpas……..
…….The voter population of Thim Throm is 6,486 and it has seven thromde tshogpa demkhongs.

A little more difficult than I thought. I won’t be understanding Bhutan from browsing the front page over breakfast.

An interesting note is that the Bhutan paper lists the TV schedule for the evening.  To tell the truth, it doesn't look much different from what they air in Paris (that's the worst thing I'll ever say about France). 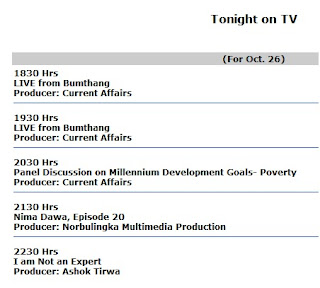 Among others I checked out:
The Fiji Daily Post

These ones were easier to understand.

After going through this mind improving experience, I have to say that I'll be sticking to the New York Times and France 24 for my news info.  I'll browse the international papers, but there's foreign, and there's totally foreign.  Of course I still have a few hundred other sites to check out.......