How I Learned About Votes for Women from Walt Disney 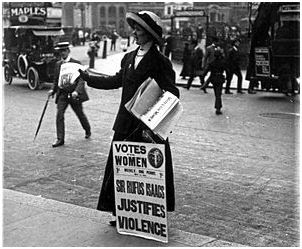 I realize more and more that the seeds of learning are planted at a very young age and some of our ideas come from the most unlikely sources.
This morning, on my way to work, I was singing (to myself) about the suffragettes -


We're clearly soldiers in petticoats
Dauntless crusaders for woman's votes
Though we adore men individually
We agree that as a group they're rather stupid!

Cast off the shackles of yesterday!
Shoulder to shoulder into the fray!
Our daughters' daughters will adore us
And they'll sing in grateful chorus
"Well done, Sister Suffragettes!"

From Kensington to Billingsgate
One hears the restless cries!
From every corner of the land
"Womankind, arise!"
Political equality and equal rights with men!
Take heart for Mrs. Pankhurst has been clapped in irons again!

No more the meek and mild subservients we!
We're fighting for our rights, militantly!
Never you fear!

Music and lyrics: Richard and Robert B. Sherman

Where did this come from? MARY POPPINS! I adored that movie when I was a kid and knew (and still know) most the songs by heart. Some things never leave us.

I had no idea what was going on with Mrs. Banks (Glynis Johns) but asked my aunt who explained to me about the suffragette movement and Mrs. Pankhurst (1882-1960).

At the time, of course, I wasn’t told about hunger strikes, forced feeding, prison and all that these women went through, but the seed was planted and as I got older I learned more.

There is a web site devoted totally to Sylvia Pankhurst and is worth checking out.

I recently purchased the book ‘Sylvia Pankhurst, Artist and Crusader’. She had a promising art career in front of her and was an accomplished painter but gave it all up for her various causes. 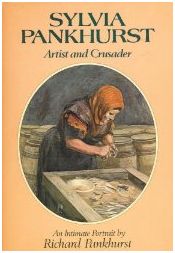 Isn’t it strange the way we learn things as children? A snippet here, a sentence there, and these thoughts and words remain with us and encourage us to explore further as we become adults.

So, thank you Mr. Disney for bringing the women's movement to my attention at an early age.  That was just supercalifragilisticexpialidocious!

On another subject of early learning.....

The first sentence I learned in French was:

Of course this was a bit optimistic but still, I’ve never forgotten.