A Funny Night for LOVE 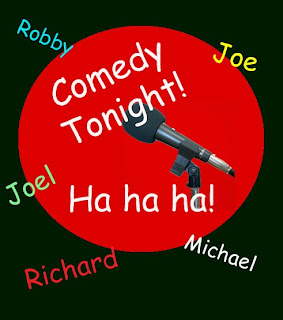 First off, I think us bloggers are allowed to push our fav causes and local events every so often  - after all, what's a blog for if you can't do some promotion for your friends?  Secondly, if you’re looking for links, this post is riddled with them so check them out! Good causes and good laughs.

Stand-up comedy is TOUGH.  (No, there's no link there).  I have to say I couldn't be funny under pressure, and in public.  I could fall apart for applause......if freezing on stage is an option I could do that.  I could probably faint if called for, or do the deer caught in the headlights thing, but that's it.

There were bums in seats last night for a fund raiser for LOVE (Leave Out Violence) at Ernie Butler's Comedy Nest in Montreal.  Our MC for the evening was my funny hubby Joe Donohue, comedian and photographer extraordinaire. Joe did a smashing job of providing laughs and introducing the comedians performing last night:

Organizer of the evening and funny man

Aside from his comedy gigs, Michael is our local daredevil. Last week he came down the outside of a Montreal downtown building in his wheelchair for another fund raising event Drop Zone raising money for the Quebec Society for Disabled Children. All I can say say is WOW and I think Michael should get this week off.
﻿﻿﻿
﻿﻿﻿
Gary Blair and Earl Pinchuk from the Arts for Healing Foundation (another great cause - check it out) were in the audience and won tickets (lucky guys) to see the Oliver Jones Trio performing for LOVE next month.


Well, I’ve covered the Life and Laugher part of my title... Paris follows later in the week!

Have a good one and keep laughing.