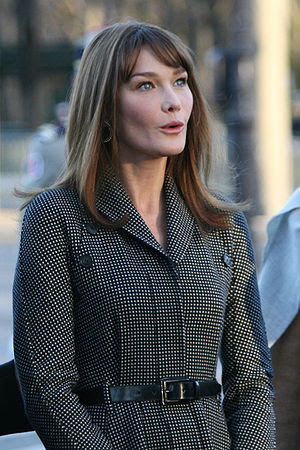 Image via Wikipedia
Sarkozy may be having his problems these days with his deportation-retirement age-tax problems, but he’ll be the only President of France who will get to see his wife on the big screen acting in a Woody Allen movie.

Woody shot his latest romantic comedy in Paris which, of course, guarantees a huge audience. No laughs? No problem. No story? Who cares? As long as Paris is in focus, we’ll be there front and center. (Of course there will be laughs and a story, I’m just saying……)

Carla Bruni-Sarkozy has a small part playing a guide at the Rodin Museum (WE’LL SEE THE RODIN MUSEUM) and Allen says she did an excellent job, very professional .

First lady of France, model, appearing in a Woody Allen movie, in PARIS………are you getting all this? Just checking.

Every Woody Allen movie shot in New York makes me want to head back there so I can just imagine what this film will do…….I better have my passport in my pocket before going into the theatre.

The movie “Midnight in Paris” is scheduled to be released in 2011.

(Oh yes, the stars of the film are Owen Wilson and Marion Cotillard)