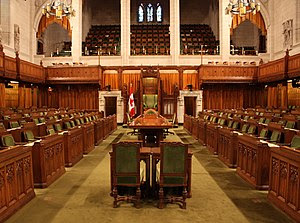 Image via Wikipedia
You may be presuming that all I think about is humor, art and Paris. Well, you’d be 'close but no cigar'*. Sometimes I think of serious subjects such as politics. Well, to be perfectly honest, the very word makes me drowsy, but some things do grab my attention.

There is actually a TV station that airs the goings on in the Canadian House of Commons. I’m sure the audience for this station is pretty small – but again, you can’t go by me. In my opinion watching hair grow would be more thrilling, but I have a few suggestions that might make things more interesting.


a. Trading Spaces for the House itself. The décor never seems to change and is, let’s face it, kind of drab and outdated. A splash of color and a few well placed accessories would help. Maybe hire a stager…..

b. Members of Parliament should have makeovers. The odd Armani suit and good haircuts would make these people more credible.

c. Give the topics more interesting names. You would never hear “Stay tuned for Oprah this week when she’ll be discussing a new bill on Infrastructure and Communities, and a motion to amend the current act”.

d. Have guest “Speakers of the House”. I might watch if, say, Leonard Cohen or Gordon Lightfoot would drop in and bring up a few topics dear to their hearts.

Overall, the issues interest me but the political blah blah blah doesn’t. I know what you’re thinking…but I can’t help it.

Maybe I’ll stay away from Canadian politics from now on. Next time I’ll take a look at the French – after all no one can accuse Sarkozy of wearing a cheap suit and the man loves a good cigar.  Now that's interesting!


*The phrase, and its variant 'nice try, but no cigar', are of US origin and date from the mid-20th century. Fairground stalls gave out cigars as prizes, and this is the most likely source, although there's no definitive evidence to prove that.
http://www.phrases.org.uk/