No Bugs In the Window Please

Recently I was doing some window shopping in Montreal and smack in the middle of a Hugo Boss display was a dead bug.  Ewww!   Hugo would not be happy.  (If a store can afford to carry designer lines, surely they can afford a can of Raid)!

You wouldn't come across this sort of thing in Paris where window design is truly an art form. 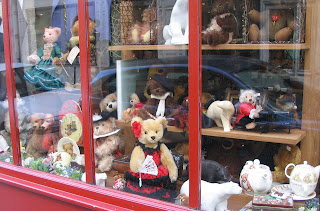 The presentations are so well done  it's like moving from one canvas to another.  You won't find dirt on the glass or dead bugs in these shop windows (even if they're selling bait you would expect some chiffon and a few sparkles to make it appealing).


Paris still has a lot of small independent shops unlike large North American cities where the chain stores have taken over.  This certainly allows more creativity when it comes to arranging the windows.