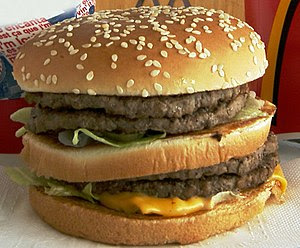 Image via Wikipedia
Fact of Life:  Kids like to have food fights (if some adult shows them how).

But......and this is a first for me.....the food fight I saw recently wasn't going on between six year olds and it happening on a busy Montreal street. People ducking hamburgers and ice cream and other assorted McDonald's goodies being hurled at great speed without aim.  It was mostly teenagers having a good time - I guess they weren't really hungry and it was more fun to take part in the fight than eat the stuff......probably healthier too.

This would only happen outside a McDonald's - you wouldn't find this sort of behaviour happening outside, say, Cafe de la Paix.  I didn't see any $40.00 steaks flying through the air or anyone being hosed down with Champagne.

Naturally being mature I didn't join in.  Anyway, I would have had to line up for ammunition and let's face it, the whole thing would be over by the time I got back outside.

I remember the best food fights (as a kid of course), and these were my arms of choice:

You'll probably never need this information, but you never know.