The Cafés and Waiters of Paris 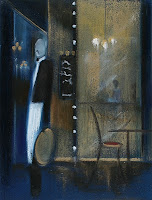 There is nothing like sitting at a Café in Paris, sipping your café crème, and watching the people go by. Yes, you can pay $10.00 for coffee if you’re sitting on the Champs Elysées, but you’re sitting on the CHAMPS ELYSEES! You can get a cheaper coffee at home at Starbucks, but you’re at home, and you’re at Starbucks! Enough said. You can also get a great coffee at any small neighborhood  café in Paris and pay the same price as at home (and you still get to see fabulous scenery)!

The waiters of Paris, and Parisians in general, get a bad rap. We’ve had waiters that have given us free drinks, one that gave us little Eiffel Tower key rings, and most are friendly and helpful. After all, it is a profession in France, not a job for students.

I’m not saying you’ll never get a grumpy waiter. Paris gets approximately 45 million tourists a year. 45 MILLION. And they all want coffee. And they all want it at the same time. And they’re all speaking different languages. That would make anyone a bit frazzled.
At a Paris café, you can sit undisturbed as long as you want. You can write your novel, draw a masterpiece, have a good think, or just relax and be thankful you're in Paris.
PS La Course des garçons de Café (waiters’ race) began in Paris and now they hold them in cities worldwide. Waiters have to race while holding a loaded tray, and not spill anything.  It’s on my agenda – inspiration for Paris Waiters series!