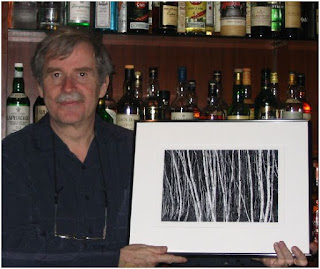 Joe Donohue
HARRY'S NEW YORK BAR in Paris is our favorite place in the whole world. Yes, the WHOLE world. It’s a haven if you want to drink, listen to music, meet friends, write your novel or just sit. The people that work there are extremely nice, and always remember us from year to year. It’s not stuffy - great décor with old wooden tables and pennants from various U.S. universities and teams tacked to the wall and hanging from the ceiling. Harry’s has an amazing history - it was a favourite of Hemingway, Gershwin and Bogart to name a few. It’s the bar where the Bloody Mary was invented. They serve peanuts and hot dogs (if you go early enough), and lots of alcohol! My husband, Joe, had an exhibition of his (fabulous) photographs in the piano bar and it was all a thrill. Couldn’t have gone better. As a matter of fact, we’re hoping to join the IBF(International Barflies). Maybe we're already members seeing as we've been going there for 30 years.
BUT….don’t be fooled! There are other “Harry’s New York Bars” in other cities including Manhattan, Berlin, and Montreux. The one in Montreux has a DRESS CODE. What? In Harry’s? I still have to check out these other locations, but I can tell you with certainty,  the Harry’s that opened in Montreal many years back wasn’t Harry’s at all. It was a restaurant with formal looking table cloths and had, what they call, ‘ambiance’. I think not. Needless to say, they’re no longer open insulting us by using the name.

My recommendation –run, don’t walk, to 5, Rue Daunou in Paris. You won’t regret it. Tell them I said hello.